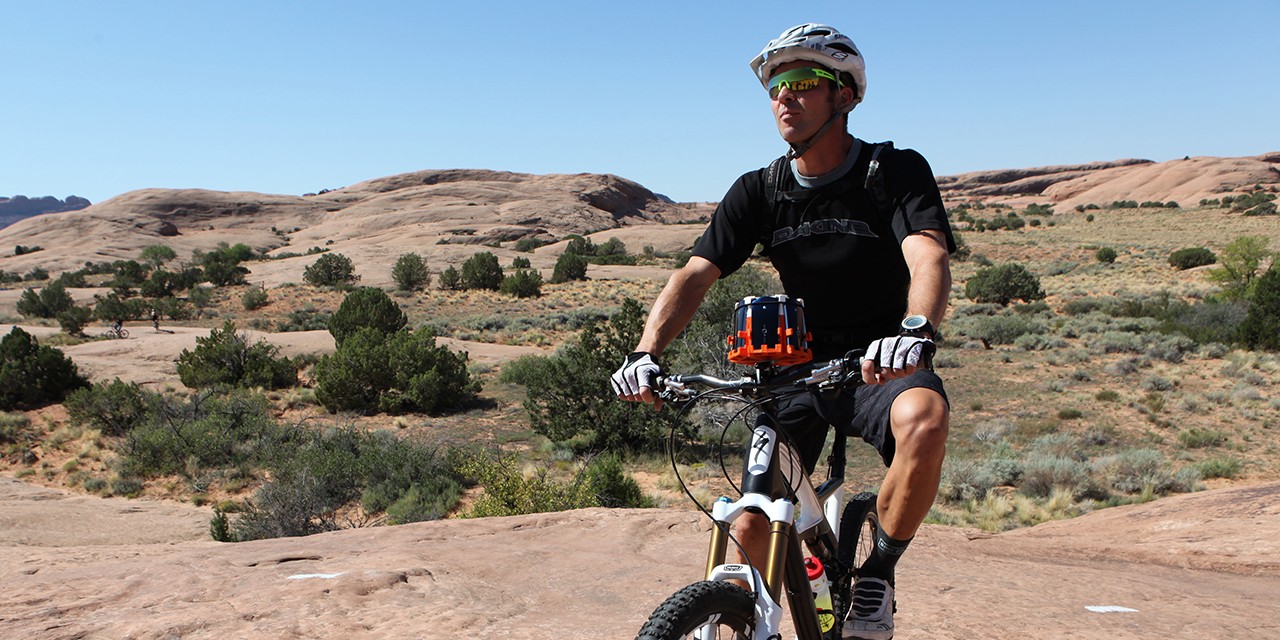 If you type “bike” in the YouTube search bar you will get around 15 million hits. Try searching for videos about other activities such as “skiing” or “climbing” and they come in far below that number (2.3 million and 3 million respectively). “Bike” is only topped by “dancing” with 32 million hits. So no wonder that even in the small niche of the 360º video community bike videos keep showing up on a regular basis.

The first bike video shot in 360º that I am aware of, was part of a marketing outreach. In summer/fall of 2011 Joergen Geerds, the founder of Freedom360, was approached by Sony Xperia Studio to feature their new smart phones in a creative and unusual way. He decided to use six phones to create a 360º video. He designed his own 3D model to hold the phones. Then, with a new 3D printer from Ultimaker, he printed through the night before flying out west for the first 360º video shoot. Subject of the video was Mark Sevenoff from Western Spirit riding the trails in Moab, Utah, on his mountain bike:

This was followed in the summer by a 360º video shot in the French Alps by Martin Arnoux edited in little planet view for YouTube:

The rig evolved… The Freedom360 mount, introduced at the beginning of 2013, was then available for sale through the webstore and reaching an ever wider audience including Jan Köhn from Erlangen, Germany. His version is a “rainy summer bike ride” in 360º:

(Use the mouse to move around, right-click for little planet view.)

So why bike videos? For starters, it’s moving. The scenery changes. It showcases the landscape and the protagonist on a moving set. Second, it’s handsfree. The camera is attached to the handlebar or backpack and the cyclist still looks like a cyclist. Finally, we all can relate.

As we just saw in the last week (April 2014), the bike video and the 360º bike video particularly has not lost any popularity or attraction. While not the first and certainly not the last, the little 360º video by Jonas Ginter, titled a spherical panorama timelapse, resonated with the online community. Shot with a home-brew mount, it is published flat (not interactive mode) and using just like Martin Arnoux’s earlier movie, the Little Planet projection:

However, it probably will not win the price for most creative editing. That title I award, for now, to the latest 360º bike video shot by Ignacio Margeli and edited by Martin Campoy:

If you however prefer to be your own editor and look around and switch projections whenever you like, here is the interactive video as well:

(Use the right mouse click to open the menu.)