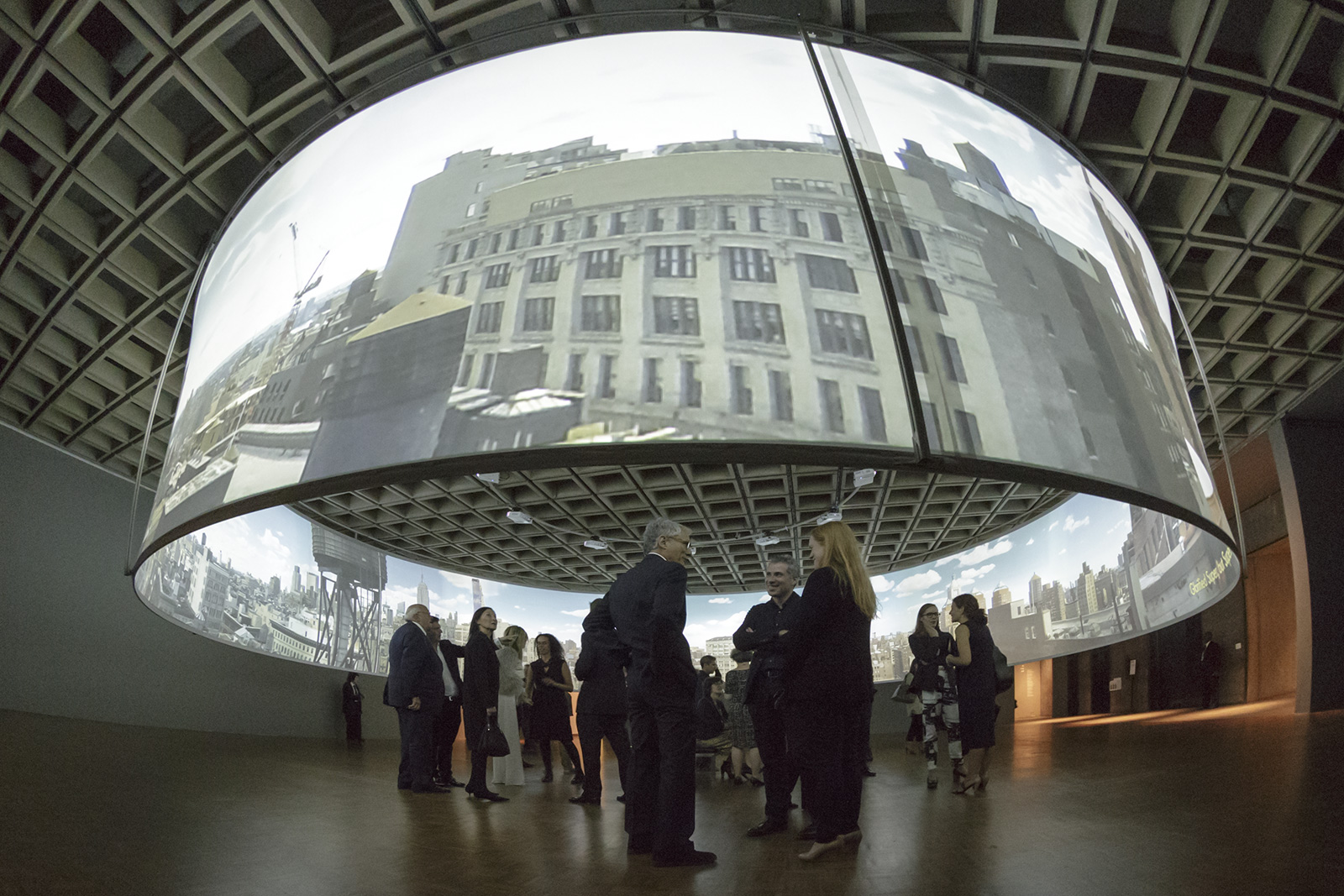 T.J. Wilcox: ‘In The Air’ at the Whitney Museum in NYC

The New York-based artist T. J. Wilcox has created a remarkable new panoramic film installation, “In the Air,” which fills up most of the second floor of the Whitney Museum of American Art in NYC. Here Wilcox revisits the “cinema in-the-round” panoramic presentations that appeared at the dawn of film history in the late 19th century, bringing the concept up to date with state-of-the-art technology to create an immersive cinematic environment.

Joergen Geerds, founder of Freedom360 and NYC-based panoramic photographer, assisted T.J. Wilcox producing this unique piece of art installation. His artistic, panoramic and technological background was a perfect match for this project. The background of the installation at the Whitney is a 10 meter diameter and 2.5m tall cylindrical projection, showing a 35min time lapse of the NYC skyline from the roof of his atelier at Union Square. Six short stories about events and characters of the city are overlaid on top of the time lapse. The background time lapse is probably the largest and most expansive 360 time lapse created so far. It spans 17 hours in August, from pre dawn to post dusk, shooting a frame every second, resulting in more than 60000 frames in total.

In order to get good time lapse material for this project, we used a Freedom360 mount in the 5X configuration, with 5 GoPro Hero3 Black cameras. Four cameras were roughly pointing North-East-West-South, and one camera was pointing up. This enabled us to create perfect hemispherical images with plenty of resolution (12000x4400px, or about 50 megapixel), running smoothly at 30 frames per second. The current installation uses “only” a small section from the central part of the time lapse to accommodate the 2.5m tall projection with 10 projectors.

The project had four false starts in July, where the weather in New York City simply wasn’t cooperating: too many clouds, not enough clouds, sudden rain, excessive heat etc. But in early August the perfect day came around: perfect clouds, and nice weather: We started shooting the time lapse at around 4.30AM, switched cards every 90 minutes, since they filled up shooting at 1 sec intervals and 12 megapixels, and wrapped up at around 9.30PM, a total of 17 hours.

The lower Freedom360 in the picture above is a backup unit, the 4 cameras taking a picture every 10 sec, while the top unit was taking a picture every second with 5 cameras, including one facing upwards. The hex quick release plates between the tripod and the two F360 allowed us to take off the top Freedom360, switch cards, resume the time lapse, and put it back into place, all within 2-3 minutes (including climbing up the roof), in order to keep the time between the takes to a minimum. Both Freedom360 units were permanently powered via two USB hubs to ensure uninterrupted power.

The raw data of this project consisted of about 330,000 jpg files, which were filed, renamed, patched and fixed to prepare them for the panoramic stitching process. Since each card change represented a tiny change in the panorama orientation (the Freedom360 mount ensures that there were no changes between the cameras), we adjusted the templates for each session to make sure the final output was perfect.

The stitching process happened in VideoStitch, and used the exposure and white balance adjustment via the time line. A great deal of adjustments had to be made manually, due to the nature of the automatic exposure and white balance of the cameras. The output was an image sequence, which then got converted to a quicktime movie (apple prores), and finally cropped and integrated into the final 35 min art installation, featuring six distinct stories about NYC history.

We were extremely happy to help T.J. Wilcox on this project, and it has been getting great reviews.